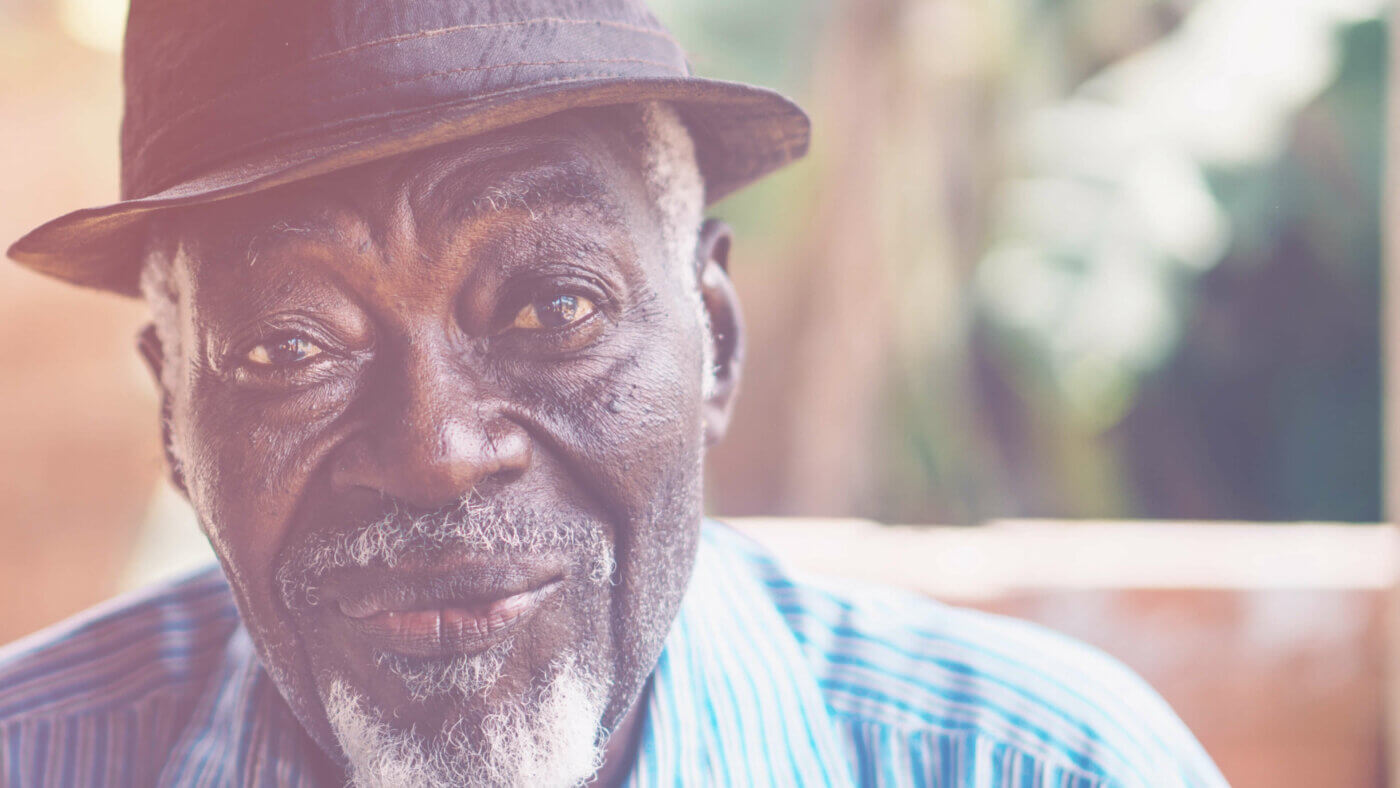 Medtronic LABS engaged us as a sincere, extraordinarily determined development organization with a noble vision that matched its mission to transform global health. Off the bat, you know this one hit home, given how closely their “Why” aligned with our own. After all, we’re a brand + experience design agency for those with ambition – something Medtronic LABS possesses in spades.

And as a quickly growing team with high hopes for the future, Medtronic LABS found itself at a critical junction in its story. They had an industry-leading team. They had efficacious, retrofittable proprietary medical technologies. They had on-the-ground healthcare processes in place. But they needed a distinct digital presence to help facilitate their organizational growth and be the fuel of their partnership development strategy for years to come.

Pro-tip for brand shops out there: when you’re engaged by an organization as genuinely extraordinary as Medtronic LABS to help them craft the foundational components of their company’s identity, just say yes – right away. This one was so much damn fun, with a special purpose to boot.

Keep reading to see how Massive set Medtronic LABS up for a vibrant future spearheading disruptive innovation in global health through a thoughtful, value-driven, and progressive brand identity they could leverage right away and grow into as the organization evolved.

Where do you start building a brand for an organization as complex and humanistic as Medtronic LABS? For us, it began with a deep dive into its company values.

Throughout our discovery process, our writers and designers dove into the nitty-gritty of LABS’ organizational purpose, unique differentiators, and value propositions so that we could construct the foundation for their new identity.

“From our first interactions with the Medtronic LABS team, their energy and enthusiasm inspired us. Our goal was to build them a brand that meaningfully encapsulated their purpose, and one they could evolve with into the future.”

Pioneering – The work Medtronic LABS was doing was completely novel. Never before had an organization possessed both the technological expertise and relationship-building prowess to reshape global healthcare.

Collaboration – One of the organization’s core strengths is facilitating collaborative action, including leveraging connections between government health agencies and local communities to foster positive outcomes for underserved patients.

Empathy – At its core, the Medtronic LABS team was powered by empathy – a shared understanding that equitable healthcare should be a fundamental human right, not a matter of where a person is born.

“Zeroing in on Medtronic LABS’s ‘Why’ was crucial to shaping the brand’s narrative. In our workshop sessions with them, we were able to find and perfect the right tone of voice that positions the brand as a bold yet empathetic health systems innovator that prioritizes good health above all else.”

So, we had the nuts and bolts we needed to get started. It was now on our strategists to parlay these insights into a memorable brand that LABS could be proud to rock.

To build a cohesive brand identity, our quest became to merge LABS’ foundational messaging pillars to a visual system worthy of underpinning the organization’s digital presence.

“We developed a visual identity system based on the brand pillars defined during discovery. We wanted to represent their commitment to innovation, their collective empathy, and their collaborative essence – in a way that was both visually stimulating and aligned with their team’s vision.”

Our design process began by examining thematic symbolism, shapes, and imagery related to the organization’s core values that we learned about during our discovery phase.

Our objective was to create a visual identity that fostered a sense of openness, warmth, vulnerability, and optimism by harnessing rudimentary building blocks that, when layered cohesively upon each other, could meaningfully—and beautifully—embody Medtronic LABS:

The triangle as a symbol of pioneering: representing manifestation, enlightenment, revelation, and an innovative approach. Triangles are often used to mark cycles of growth that lead to a higher state of being.

The pentagon as a symbol of convening power: an asymmetrical representation that connotes multilateral, international relationships and LABS’ ability to build bridges over previously uncrossed social moats.

With the foundations of Medtronic LABS’ visual identity set, we were off to the races. Our design team got to work on strategically amplifying their fresh visual system—plus a new logo—in web form.

We started by constructing an overlapping, mountainous emblem to nurture the brand’s underlying themes, and represent a couple of indispensable components:

Transparent layering across the website’s key pages was harnessed to evoke the embedded trust LABS’ earns with their partners, the communities they serve, and the global health sector as a whole.

Deliberate colour choices merged sentiments of earthiness and liveliness, facilitating a visual website experience rooted in nature: green, blue, and sandy colours felt appropriately modern for the technology-first company they are while being human enough to remain centrally connected to their mission.

Font-wise, we opted for a generic, accessible font – so that no matter where their users are accessing the site, main messaging and calls to action remain crystal clear. 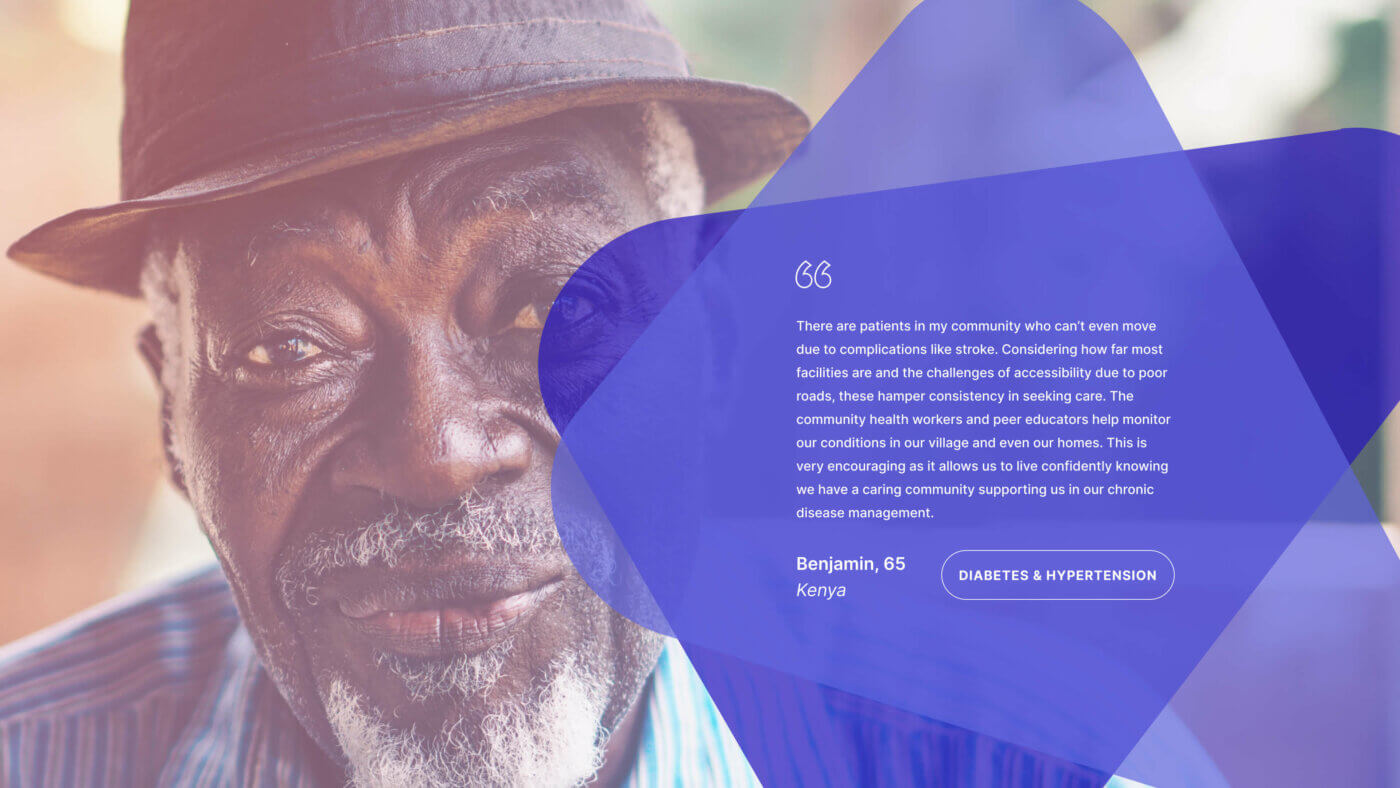 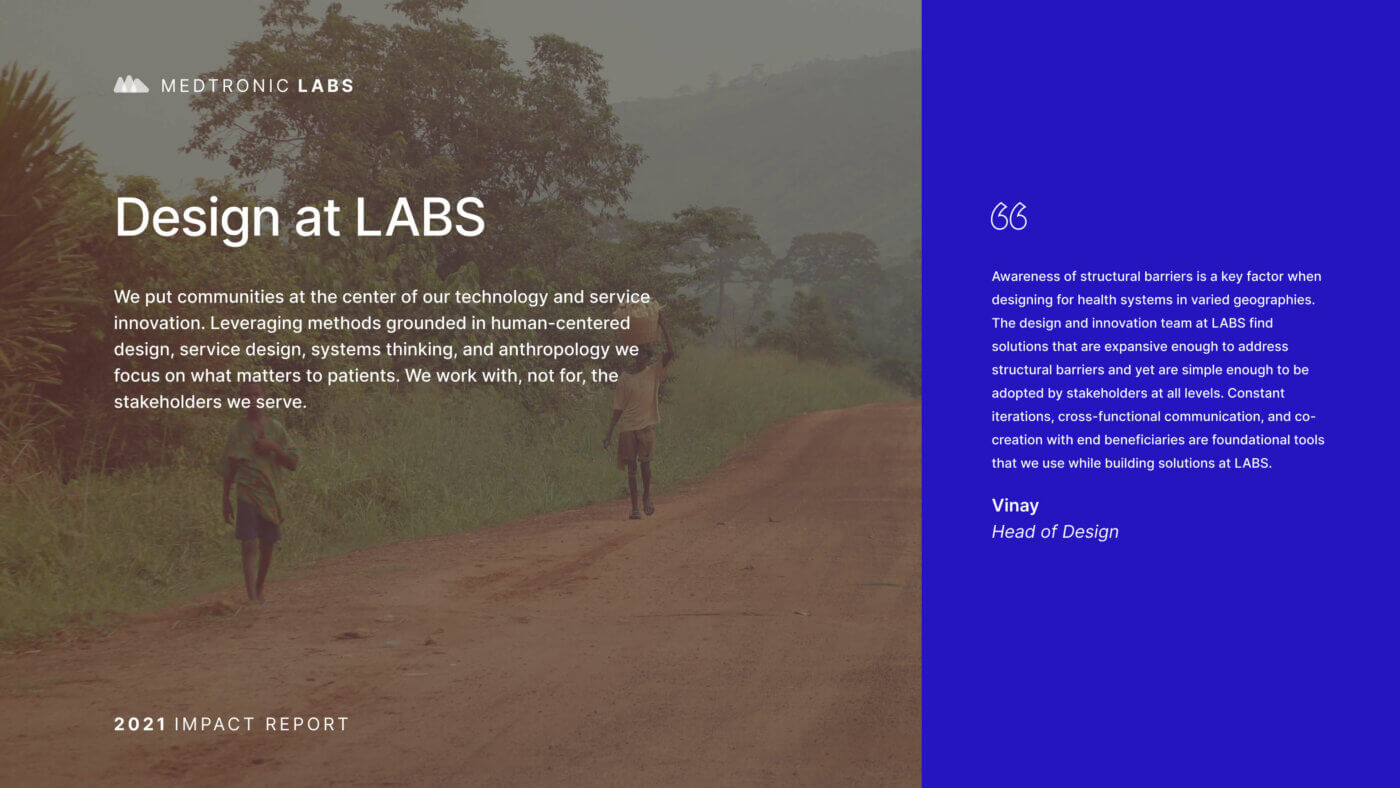 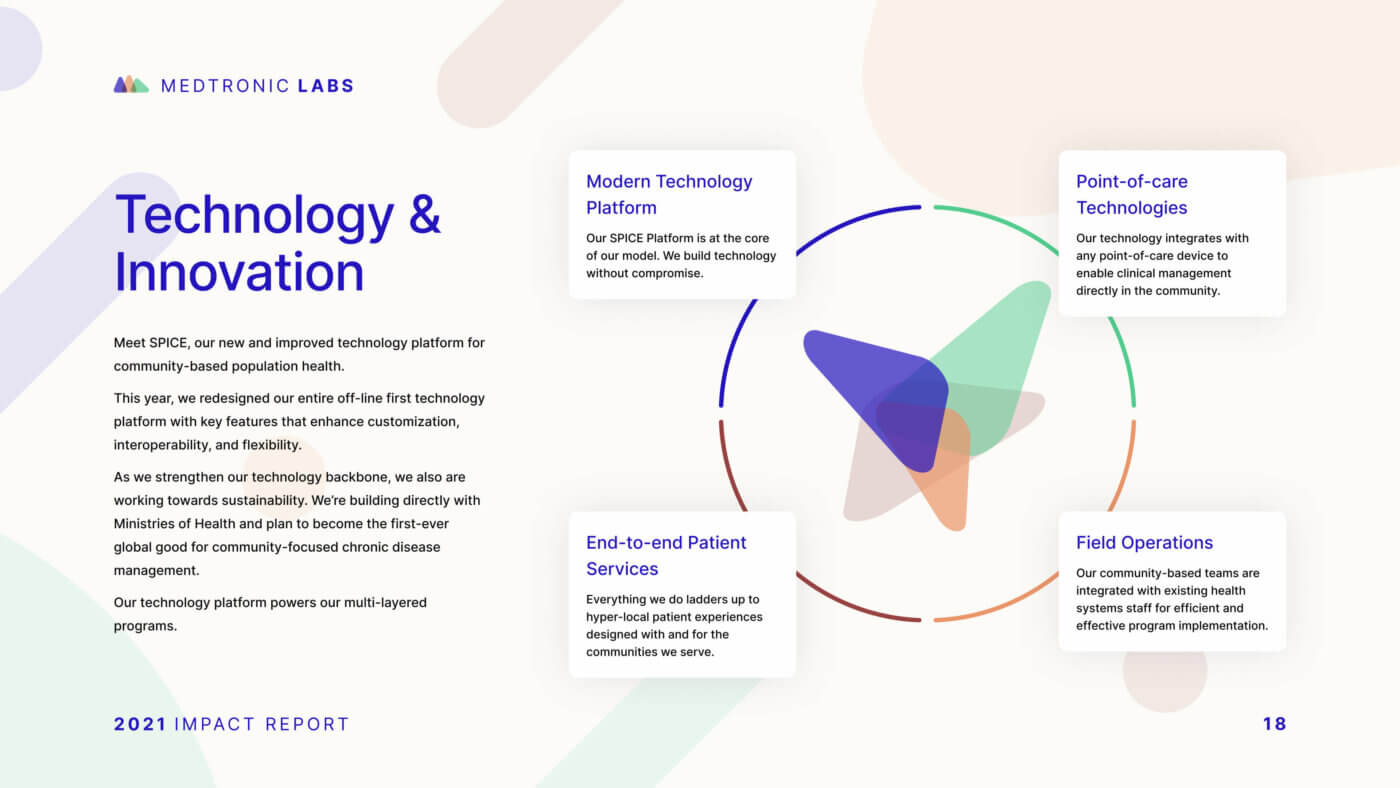 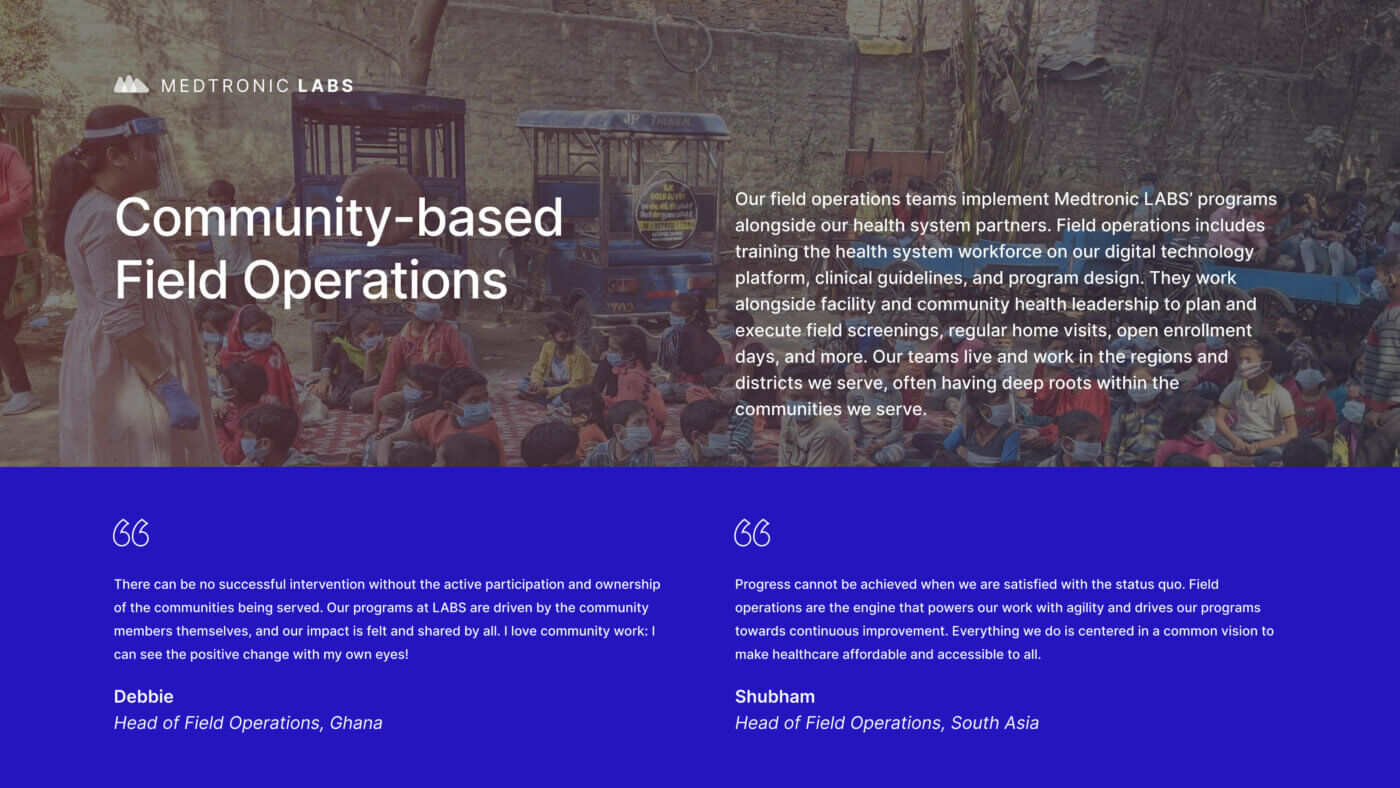 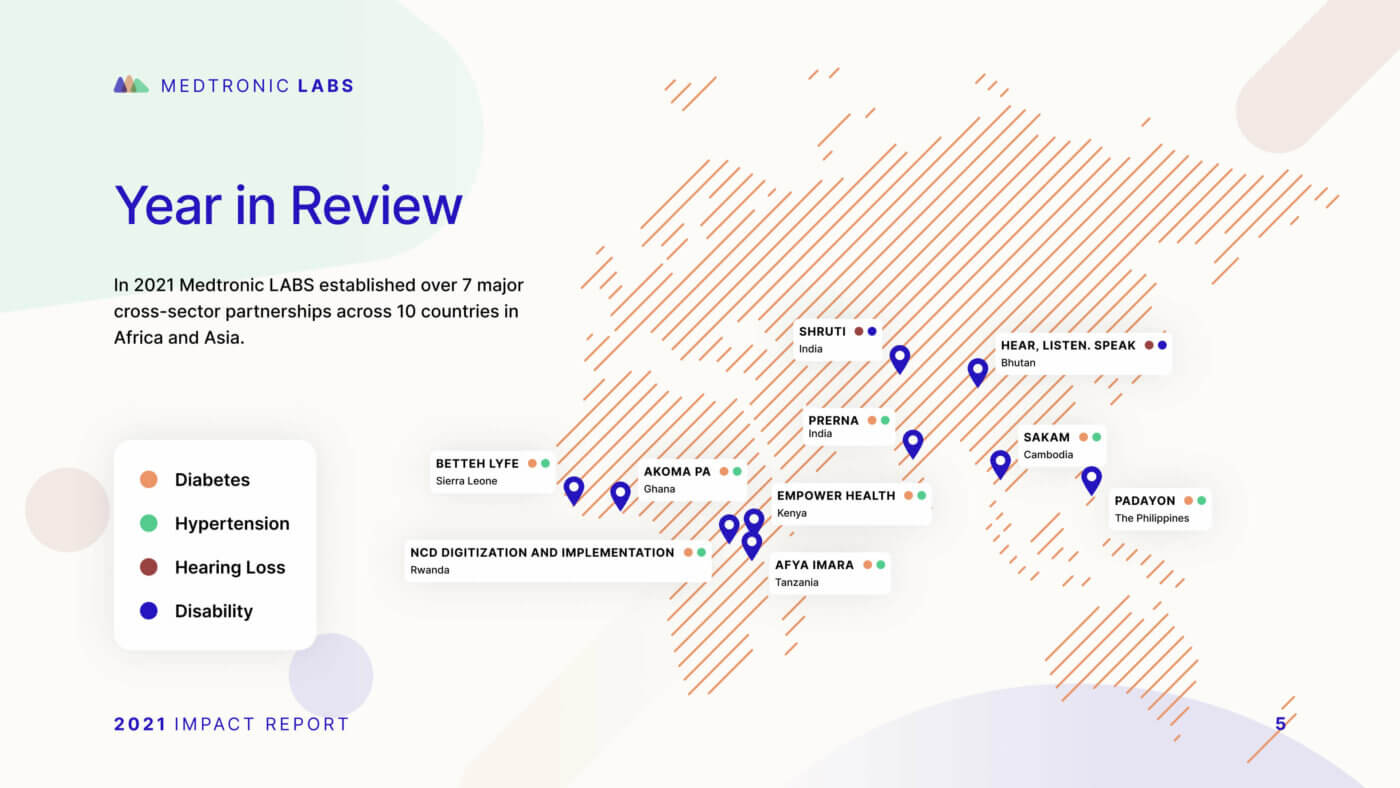 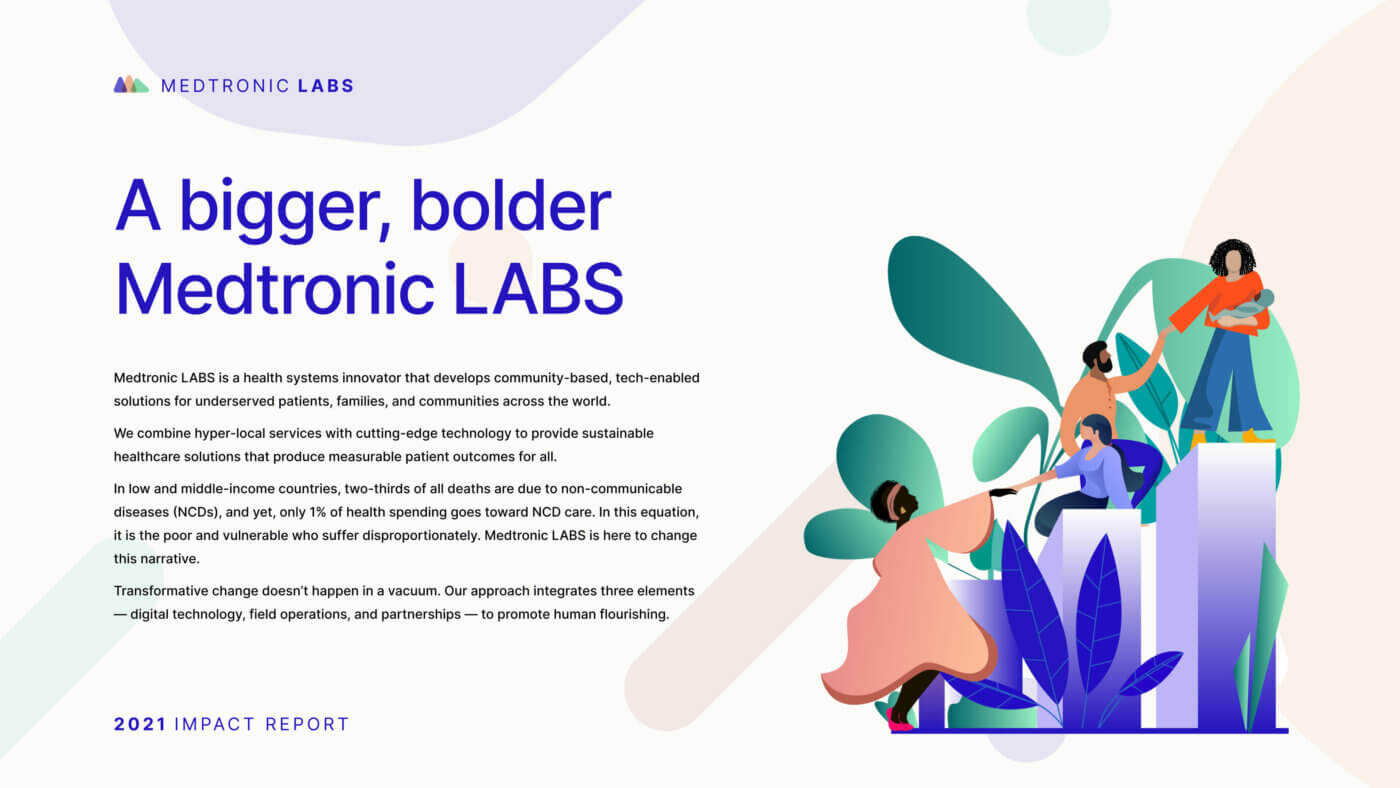 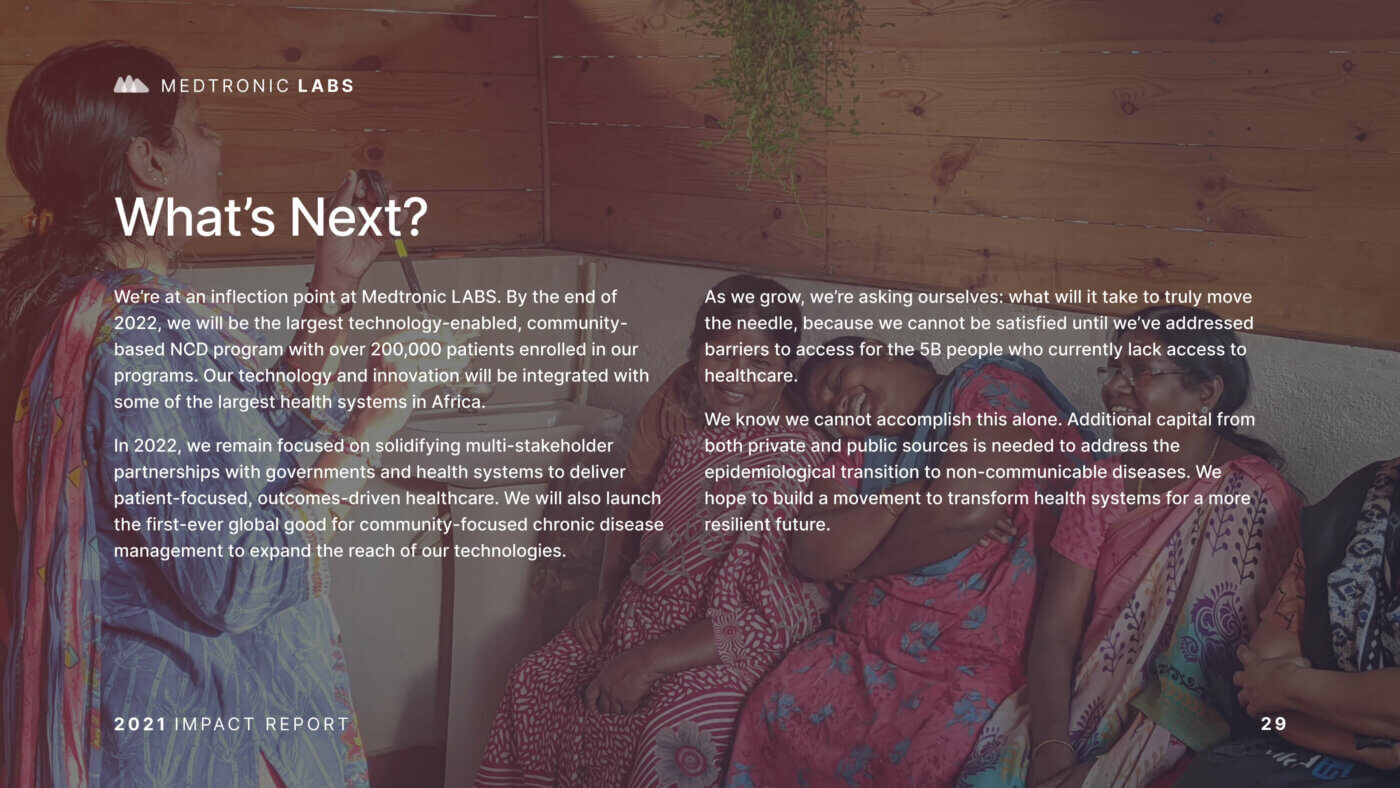 Now for the bones that make a website what it is. And while accessibility, user experience (UX), and the backend authoring experience (AX) may not win awards, they’re the essential foundations of sustainable, customizable branded websites.

Our solutions for Medtronic LABS were as follows:

A Story Worth Following

And so, it’s onwards and upwards for Medtronic LABS.

On the back of our creative direction and strategic branding approach, they’re now well-equipped for expansion with a new set of foundational messages, a visual identity, and a website to match their ambition.

We can’t wait to see all the remarkable things they accomplish – we know this is just the beginning of the Medtronic LABS story.

Follow Medtronic LABS on social media to stay tuned in on their journey: